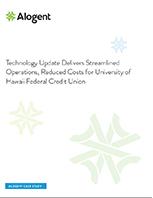 University of Hawaii Federal Credit Union ($549 million, Oahu, HI.) adopted Alogent’s ImagePoint Hub and Foundation solutions in July of 2011 to facilitate check clearing directly with the Federal Reserve. Founded in 1955 and run by President/CEO Jeanine Morse, the credit union serves the students, faculty and staff of the University of Hawaii through two branches on the main Manoa campus, its headquarters located nearby and a recently-opened fourth branch on-campus on the west side of Oahu. Historically, University of Hawaii FCU has been focused on serving the school’s faculty and staff, but the credit union has lately expanded its outreach efforts to grow its student member base. Currently the institution caters to over 25,000 members.

The credit union had an existing line of credit with the Fed that needed to be expanded in order to bring its entire item processing in-house.  The Fed provided all the necessary information to re-map the credit union’s core files and helped ensure that the transition went as smoothly as possible. Concurrently, the project was completed on-time, within the credit union’s 4-month window.

Alogent recently sat down with Travis Bow, VP of Member Support for University of Hawaii FCU, to discuss the credit union’s success with direct-to-the-Fed processing.

Alogent: Why did you decide to replace your outsource provider with a direct-to-Fed solution?

Travis: We were originally prompted to re-evaluate our item processing solution by the corporate credit union restructuring in 2010 and 2011.  Our additional research quickly turned into full due diligence and vendor comparisons. We looked at banks, other corporates, and other technology vendors including core vendors. We discovered that using a third party provider, or a “middle man,” would be much less cost-effective long-term.

It became very clear during the process that going direct to the Fed would be the most cost-effective solution. All of the vendors we considered for direct-to-Fed item processing were fairly similar in terms of functionality- they all use X9 files to clear checks, after all. We ultimately selected [Alogent] due to the ease and speed of implementation, cost and ongoing operational impact.

Alogent: So then do you expect this one-time investment to replace the long-term outsourcing expenses?

Travis: Yes, the Fed fees are significantly lower than we were paying for outsourcing. It will take less than 5 years to recoup the one-time cost of the system, but we expect to continue using the system for as long as we are clearing checks for our members.

Alogent: Cost of the system and Fed fees are only one part of the overall impact. Did you need to add any employees or invest in additional training to manage the system?

Travis: None of our front-line (capture) users needed any retraining since they were already using [Alogent’s]capture application through our corporate provider. And once the new software was installed, we just changed the file destination in ImagePoint Branch and that was pretty much all it took. We’ve found that the extra work involved on the back end is pretty minimal—sometimes it even takes less time than it used to when we were outsourcing! We were easily able to absorb the extra with our existing staff.

Alogent: How long does it take on a daily basis to manage items presented at the teller line and inclearings/returns?

Travis: The biggest change has been reviewing our own items since we do a back-office review of all items over $2500. But even adding that and the few times a day when we are downloading or uploading X9 files, hasn’t even come close to another FTE. In terms of added labor and cost, running our own item processing operations has actually exceeded our expectations.

Alogent: About how many items do you handle per month, both outbound and inbound?

Travis: Ongoing maintenance of the system has been pretty minimal. I rarely hear about [Alogent] at all—which is a good thing! Once in a while we have to update the server, but the work on our end is minimal. We have found both front-line support and executive management—including (former) CEO Hal Tilbury—at [Alogent]  easy to reach and quick to deliver answers. [Alogent’s] support team is often able to help us trouble-shoot on related systems and hardware as well, getting us back up and running even when the problem is not with an [Alogent] solution.

Alogent: Going back to implementation, how was that?

Travis: Implementation, despite some setbacks, was still completed within our time constraints. We received excellent support from [Alogent’s]  project managers throughout the entire process. They installed the software remotely, sending an implementation engineer on-site for the final phases and the go-live. We ran both systems for just a few days, then cutover to the [Alogent] system completely within just one day.