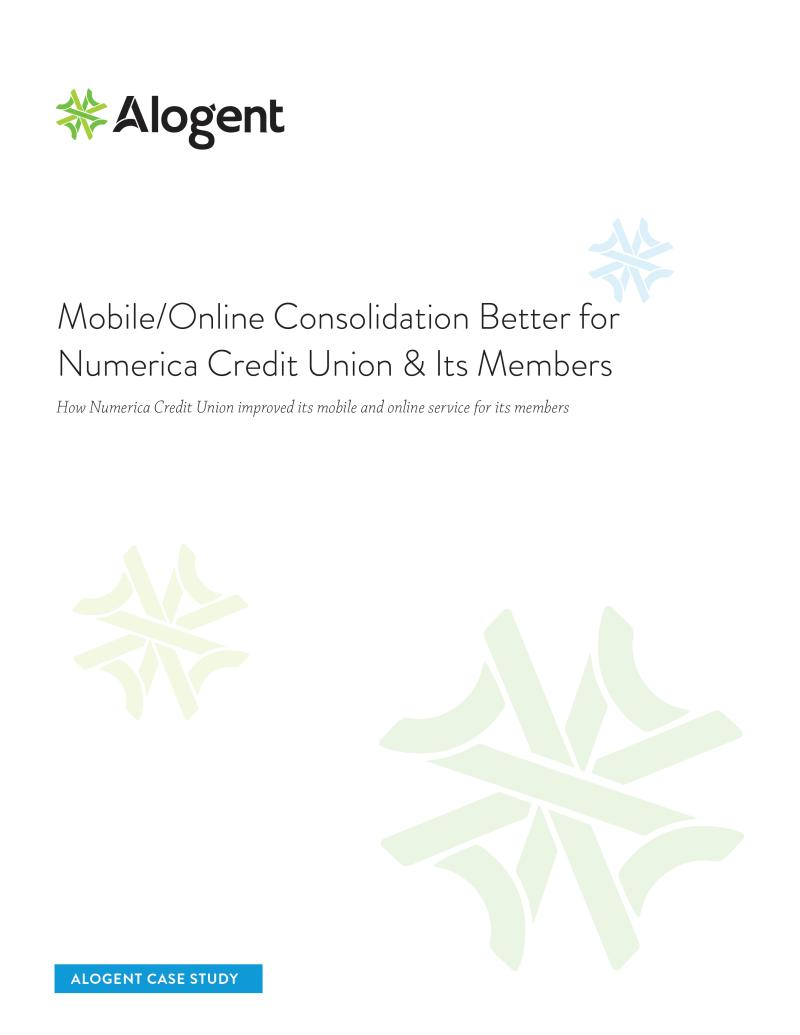 “We needed to find a way to apply rules and limits across all access channels,” she said. “We didn’t want to allow members to transfer $10,000 in online banking and $10,000 in mobile banking on the same day when the limit should have been an aggregate limit of $10,000.”

Additionally, any changes made in online or mobile banking had to be written back to the credit union’s Symitar core system, which was acting as a middleman between the two vendors.

“It was challenging sometimes, because you’d set something up in online banking quickly, like a single sign on, and then it would take a lot of effort to make it work for mobile,” she said. Additionally, two separate vendors meant members could be locked out of mobile banking, but not online banking, which was difficult to explain.

“Things were starting to diverge instead of converge, and we needed them to come together and make it easier for us to manage,” she said.

Numerica had been using Jwaala’s Ignite platform for online banking for a number of years, so moving to Ignite for mobile seemed to make sense. However, Murray knew that the appropriate level of due diligence was critical for such an important decision. She thus included several other well-known vendors in her evaluation.

At the top of Murray’s must-have list was the ability to gain functionality for members without giving up any of the current functions Numerica’s existing mobile vendor provided. In the beginning, remote deposit appeared to be a snag. Jwaala had never worked with Numerica’s remote deposit vendor and suggested the credit union hold off in offering the service in its mobile app until after deployment.

“At the time we were taking in over $4 million a month on remote deposit each month. We absolutely had to have remote deposit working the day we went live,” she said.

“Jwaala has taken great care to make sure that both online and mobile are really running off a single platform,” said Murray. “This means that I didn’t have to go back and remember what logic we used to make things work, key off it and try to make it match. We were able to leverage all the work we put into configuring online,” she said, adding that hands down, the turnkey service provided by Jwaala has been the best management benefit.

Consolidating on the Ignite platform for both online and mobile also fit well with the credit union’s in-house consolidated servers.

Better for the Members

According to Murray, members benefitted from this consolidation in a number of important ways. First, because online and mobile share a common platform, members enjoy a familiar user experience across all devices. “It doesn’t make sense to have one look and feel for online and another look and feel for mobile,” she said.

“Member-facing support is also now much easier since we’re only dealing with one system,” she added.

“It makes training new employees easier, which translates to faster answers and even better service for our members.”

Hybrid App Is a Benefit

Murray said some financial institutions may shy away from Jwaala’s mobile solution because it’s a hybrid app. The concern is that users wouldn’t like that, but Murray said for the most part, members don’t know the difference. In fact, not using a native app solution actually provides more freedom to update mobile banking options without requiring users to update the application.

With a native app, Murray explained, mobile providers are pressured to update as many things as possible to make it worth the end user’s while to download the update. Plus, trying to get all users on the same app version is a difficult challenge. Numerica has over 70,000 members enrolled in online and mobile banking.

“Even if half of our registered members are regular mobile banking users, that’s 35,000 people you’re expecting to properly manage their app updates,” she said.

In the end, Murray said despite being initially nervous about Jwaala’s hybrid app approach, it’s actually been a feature she loves.

“Look at all of your single sign-ons, look at all the features you have and determine what you want included,” she said. “For us, we’d like to have as many features in mobile as we have online, and there are a couple of little things that don’t make sense or are a little more difficult to do in mobile. But we still continue to push toward that and having just one vendor to deal with as you’re doing that simplifies things so much.”