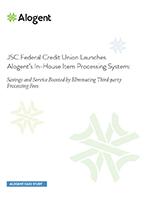 In 2010, Houston-based JSC Federal Credit Union faced a problem shared by thousands of other credit unions nationwide. Having seen its original $1M capital deposit with Southwest Corporate Federal Credit Union (now Southwest Bridge) lost to Southwest’s stabilization in 2009, the credit union was apprehensive about the rapidly approaching announcement of further recapitalization.  A loyal partner of Southwest Corporate for over 10 years, JSC—like most credit unions—relied on its corporate credit union for many essential services including securities and investment advising, international wires and item processing.

JSCFCU faced a difficult decision. “Everyone at our credit union received excellent service from Southwest Corporate. We had a great working relationship. However, another capital contribution would have negatively impacted both our members and staff,” said Paul Maslonka, Chief Operating Officer. Another recapitalization would have put member assets at risk. Maslonka added,  “We had no choice but to look for alternatives to the services provided by our corporate credit union.”

JSC had been using Alogent’s Branch Capture solution since 2005, licensed through Southwest Corporate. In March 2010, the credit union reached out directly to Alogent. Because of the  existing relationship, Alogent was the logical first step in evaluating alternatives for check  capture and item processing.

“Timing was everything,” said Maslonka. “We were worried about what the financial burden of  recapitalization would mean to our membership.” Not only was it critical for the credit union to avoid the financial expense, but it was extremely important to prevent a costly, time-intensive retraining of the front-line tellers and accounting staff.

JSC’s executive team examined solutions from other in-house solution vendors and also  considered moving its check clearing and settlement to another corporate credit union. But the credit union ultimately chose Alogent’s solution because of its streamlined workflow, ease of use and the considerable projected savings.

After conducting a comprehensive analysis of JSC’s check volumes, Alogent recommended  ImagePoint for cash letter creation, forward presentment and in-clearings processing plus  Receipt Manager® for enhanced transaction balancing and research. Based on the credit union’s current volume of 14,000 checks per day, Alogent estimated total cost savings of over $10,000 per month, or $600,000 over 60 months.

“[Alogent’s] solution allows our tellers to proof and balance prior to finalizing batches. This is important because tellers perform all their cleanup work during scanning—prior to finalizing the batch—then create the posting file and cash letter only after the batch has been perfected.” said Maslonka. Compared with other solutions, only ImagePoint offered this functionality—other solutions required a second pass at the data for corrections, which would require significantly more time spent by tellers and the accounting staff.

The change from Southwest Corporate to Alogent was a minor shift for the credit union’s staff. JSC already had one share-draft person in the accounting department responsible for pulling files from Southwest Corporate and posting returns. With the Alogent products in place, the same employee simply pulls and posts files for clearing using the Federal Reserve Bank’s website, instead. The credit union replaced a significant monthly expense with less than an extra 3 hours per day of labor using Alogent’s in-house system.

“I was prepared for a more substantial impact on our staffing and process. Our employees were up and running with minimal training—the products are very user friendly. We easily incorporated the [Alogent] product functionality into our existing workflow with no impact on our staffing levels,” Maslonka added.

The cost savings that JSC gained from moving its item processing in-house allowed it to replace its branch capture system with ImagePoint Teller and Receipt Manager. “We took the savings and invested it in ImagePoint Teller and Receipt Manager for all 16 of our branches—including the cost of adding scanners at every teller workstation,” said Maslonka.

“From the time we made the decision to go with [Alogent], through implementation, and  now running the system for our daily work, the process has been seamless,” said Maslonka.  [Alogent’s],  team coordinated directly with the Federal Reserve Bank to ensure a smooth transition to the new item processing system. The credit union already had a master account with the Federal Reserve Bank for ACH and simply added item processing as an additional service. Maslonka added, “If you don’t already have a master account with the Fed, there is some time involved in setting up the VPN and FedLine, but working with [Alogent],  and the Fed is easy.”

“The initial setup was painless and our daily work has changed very little. Now we simply download and upload files directly with the Fed. We have very thin staffing levels. If we can do it, anyone can,” Maslonka.