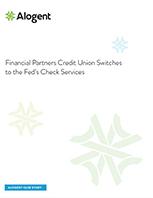 Financial Partners Credit Union (FPCU) consistently looks for ways to not only provide enhanced services to its members, but also improve internal processes. Similar to many credit unions, FPCU recently had to evaluate its current processes and operations during a time of vast environmental change for the credit union industry. Founded on the premise of finding solutions to challenges for its members, managing change was nothing new to FPCU.

In 1937, eight North American Aviation employees pooled their money to start a credit union called North American Aviation Employees Federal Credit Union. Despite having no paid employees, limited loan and deposit accounts and little capital, the idea took root and membership and assets grew. Today, what we now know as Financial Partners Credit Union is one of the largest credit unions in the Los Angeles, California area, with over $787 million in assets and 50,000 members. The credit union has full-service branches in Brea, Downey (its headquarter office), Huntington Beach, Orange and Woodland Hills plus six express offices, many of which are located at Boeing campuses.

Looking to provide additional solutions to its membership, FPCU considered its options. As FPCU was considering a switch to using Federal Reserve check services, FPCU employees were concerned about some of the myths they had heard. They were expecting the transition would be difficult and laborious without much help from the Fed. They discovered this, in fact, was not true, as FPCU made a seamless transition to using the Fed’s full suite of check services in just 60 days, aided each step of the way by the Federal Reserve Banks’ Check 21 customer support staff.

Elvia Saputo, director of support operations at FPCU, noted that the credit union received great support in each of the areas that it needed, making employees feel more comfortable about the aggressive transition schedule. FPCU already accessed services such as Fedwire® Services, FedACH® Services and FedCash® Services via the FedLine Advantage® access solution, which was helpful in keeping the process moving quickly. Putting the final piece in place in working directly with the Fed was the addition of the entire suite of Check 21-enabled services, including FedReceipt®, FedReceipt Plus for Returns, FedForward® and FedReturn® Services.

“We moved our last piece of business to the Fed within 60 days. We thought it would be much harder than it was, but the process was seamless.”- Elvia Saputo Director, Support Operations Financial Partners Credit Union.

Savings have been substantial

Another myth was busted during the transition to the Fed: that the transition would require a number of new staff and that it would be costly. FPCU found that no additional staff was necessary and that helpful training tools and support for existing staff were readily available. More importantly, FPCU says it is now saving 30 percent over its previous costs, and is able to offer more cutting-edge services to its members.

The major benefit gained by FPCU is increased control over its check-processing operations and the elimination of paper moving through its systems. In conjunction with shifting its check services to the Fed, FPCU implemented image-enabled automated teller machines (ATMs) and Mobile Deposit. The investment FPCU made in software, equipment and servers allowed it to accomplish both efforts. “We saw this as a solid, overall investment as it allowed us to add additional benefits for both our staff and members,” stated Saputo. “Staff no longer have to manage paper coming in from the ATMs as they now have one electronic file for all channels and locations.” This streamlines the reconcilement processes, which in turn saves time for the FPCU team and money for the credit union overall.

An additional benefit experienced by FPCU came from moving all of its funds to the Fed. This shift has enabled FPCU to conveniently transmit large wires up to the 3 p.m. PT deadline (for third-party wires) without having to move funds from alternative sources and pre-plan for large wires. “Money is where we need it, when we need it,” stated Saputo, adding, “Large wires can be done at the normal deadline, which is an added benefit to the credit union and our members.”

“Our move was a complete success. Not only are we saving 30 percent over our previous costs, but our members are experiencing cutting-edge technology with the ability to offer deposits via our image-enabled ATMs. We are ahead of the competition in this area, as many other financial institutions don’t offer those services today.”- Elvia Saputo Director, Support Operations Financial Partners Credit Union.

Saputo indicated that the Fed’s dedicated team was great to work with. “The Fed staff really understood the changes taking place and our needs,” she stated. “From project launch to final cutover, staff were helpful and moved quickly to provide support for our 60-day window.” Saputo encourages other credit unions not to be afraid to ask questions and demand that things get done. “The Fed provides great support, and you can be aggressive in making your move,” said Saputo. The Fed team was instrumental in helping with robust testing, during which FPCU would test, make changes, realign and do more testing, as needed. Solid testing, properly trained staff and access to the Fed’s Events and Education offerings were critical to FPCU’s overall cutover success.