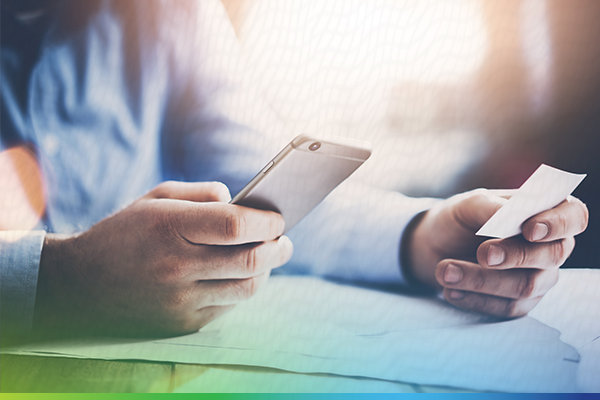 "Long-term success requires a consistent experience across all channels."

So how can banks leverage bigger wins from their investments?

Consumers and businesses want convenience and they want faster funds availability. By 2016, 77% of all Americans owned smartphones. Over half were using them for some type of mobile banking activity and their use of mobile check deposit grew from 51% to 70% last year (Federal Reserve Bank, 2016).

With nearly a third of all customers and prospects already using mRDC, and a continuing growth rate for adoption, it’s fair to say that failing to offer this service is a competitive show-stopper. That’s why, according to Celent’s latest report, RDC is at the top of mind for most financial institutions (Celent, 2017).

Mobile RDC can significantly reduce operating costs—from $4.00 per teller or call center transaction to $0.10 per mRDC transaction (Bain & Company, 2016). This has indirect cost implications as well, if faster transactions result in increased loyalty and satisfaction rates.

Speaking of loyalty, it’s worth noting that traditional financial institutions have an especially uphill fight to acquire new millennials, that desirable generation of up-and-coming potential customers that go wherever they find the services they want. Poll after poll shows that, across demographic lines, this group tends not to trust traditional institutions as strongly as previous generations.

It’s difficult to measure the opportunity costs of losing prospective account holders, but it seems clear that loyalty is a tenuous thread for account retention compared to offering high-demand self services.

The most recent Federal Payments study data tells us that about 35% of the 19+ billion checks processed last year were deposited remotely. This means the opportunity for growth is substantial.

Mobile RDC adoption has increased for all banks, but the rate of adoption (and generally of success in using) mobile banking is highly stratified by bank size. Large banks and credit unions greatly exceed community and mid-size banks in terms of both adopting the technology and getting their customers to use it (Celent).

Given that banking services are becoming synonymous with digital services , and the competitive need for mRDC in particular, what’s causing these banks to delay?

Banks are understandably cautious when it comes to the risk of fraud. Checks remain by far the largest source of fraud, and there has been speculation that mRDC will create new vulnerability for fraudsters. So far, not much evidence has materialized that this is true, and losses do not appear to be increasing even as the dollar value per check transaction continues to rise.

One of the less talked about sources of resistance is the disappointment reported by some banks whose early attempts to implement mRDC have not been widely adopted. Everyone has heard the stories about low adoption rates, about customer concerns around security and privacy, and about lack of motivation to learn new habits. These fears are real, but all have been overcome many times over by banks and credit unions.

The risks we’ve been talking about may exist as separate worries by different departments in an institution, but they’re closely related.

The question is how to make mRDC profitable.

If the payoff for mRDC investments comes from shifting users from in-person to self-service deposits—plus increased customer satisfaction and retention—then the technology and implementation decisions need to be focused through the lens of the customer experience. What are the boxes your customers want to check off when they are evaluating you?

Author Bob Meara, speaking about another digital service at a late 2016 Alogent webinar also observed that, “unless institutions understand the omni-channel customer journey, and know how many of their prospective accountholders they are turning away, they literally have no way to quantify the opportunity costs they are already beginning to pay.”

Long-term success requires a consistent experience across all channels. Users need a single learning curve and expect a uniform interface. A deposit in a branch, online, and on a phone or tablet should work essentially the same way—provide funds access within the same time, have the same deposit limits and eligibility criteria.

Making sure the rules are the same for in-branch and remote deposits can be facilitated by a combination of three features that are available with today’s advanced technologies:

It goes without saying that mRDC solutions must also be easy and intuitive. This means a smooth, ergonomic UI, recognizable branding and flow across channels, and supplemented with a strategic campaign incorporating both promotion and training to lower the barrier for even the most reluctant customer.

The bottom line is that without mobile banking and RDC, banks will not remain relevant to their current customers, much less to prospective customers. By selecting the right technology and embedding it in an enterprise-wide, customer-centric planning environment, digital investments can and do pay for themselves in mobile adoption rates and account growth.